Skip to content
When will we ever learn? Maybe that is too much of a sweeping statement. When will I learn? Learn that you should never leave work to the last minute? A deadline looms and we feel we are oblivious to time and will get the assignment done. But here we are the weekend before the deadline, slowly come to realise that nothing of submission quality has materialized. With this realisation, the heart begins racing, the sweat pouring down your brow as you mind frustrating tries to think of some sort of exit strategy. Help from a friend, a search on trusted Google, or even persuading one of your more organised, intelligent, beautiful, wonderful friends to part with their A grade work over MSN, just to make sure, “I’m on the right track!”. We have all been there. Okay sure, some of you out there are perfect and have never faced this stressful predicament. Generally then, most of us, have had the experience of a pending deadline and having to fight a waging war to get the assignment in on time. Once the heat is off and the half hearted attempt has been submitted, we put this lesson down to experience. This will never happen again. Yes you pulled off an all nighter, but you do not want to put your body and mind through that again. After all you are beginning to learn that no matter what you try, no matter what you do, you cannot beat the Anatomy of an All-Nigher. You may also want to master your technique, you never know in the future when you might need to Pull Off An All Nighter. Never again. Never again will you leave your work to the last minute. Never again will you take this stress and strain of a coursework take over your life for a few days. Next time you will be organised and more importantly carefree. Does this happen? No, it never does. I remember in 1998, during my GCSE Electronics course, how I had to go to some of the lengths described above to get the work done and in on time. I made those promises to myself. Here, I am some six years later, unable to practice at all what I preached. Now the most important piece of paper in my possession is captured below. The most important document until I receive my degree that is. I handed in my Final Year Project at 9:20am this morning. I do feel a great sense of relief. The greater relief will come in twenty days time, some three weeks away, when my final exam is done and dusted. 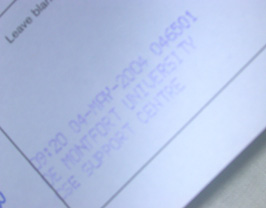 I briefly watched the Woman’s FA Cup on BBC One, yesterday afternoon. I was surprised how far the female players have come in such a short space of time. Particularly when you consider that this country still does not have a professional woman’s league. America of course leads the way on this and has produced some amazing talents. No wonder so many of our players are heading across to Glory land to hone their skills. Arsenal beat Charlton, with a dazzling performance from Julie Fleeting scoring a fantastic hat trick. The game has a long way to go to match the stand of the Premiership and gain the same level of support on the terraces. However, if this match was anything to go by, then the popularity of the sport is growing and perhaps it becoming the number one sport for women, ahead of the former front runner, netball. On Sunday night, well technically the early hours of Monday morning I was listening to Up All Night on the radio. This is something that I have been doing since I feel in love with talk radio back in the early college days. Anita Anand was asking the listeners for their favourite theme music from the shows of yesterday. They played the BBC favourite, Match Of The Day. The theme for the other side was provided by Silsoe with a synth pop from the 1986 World Cup with “Aztec Gold”. This got me thinking of my favourite sport related television theme tune. There was no contest. There could be only one winner. Let me take you back ten years. This was a time when my interest in football was nonexistent. If anyone asked I supported Arsenal but ask me to name 4 players I would be struggling. To this day I do not know why football did not appeal to me at the tender age of 12. I was playing the game regularly at school and enjoying it. However I knew nothing about the events on the field in the Premier League or the international stage. My uncle watched the games at this particular World Cup with great passion. I can recall him with beer in hand watching the Republic of Ireland in action. Of all the things that stayed with me that summer, it was the music. The BBC now is a shadow of it’s former self. Never mind. The first thing that would take bring your attention to the television screen would be the BBC Sport indent. A globe with the neutron orbiting around it and leaving a trail of yellow and red. Then the music would kick in. Leonard Bernstein, Orchestra & Chorus with “America“. The most superb title sequence for an international event ever. Bar none! I did not know until my Dad told me that the theme tune used was from the fantastic musical, West Side Story. I also then discovered that there were lyrics to the song. To date I have never had the opportunity to watch the film on television, with it shown almost religiously every Christmas period. 🙁 The song is important to me because I went to the United States in February, 1996. The impression that the country left on me was awe inspiring, and I knew that one day, everything too would be, “Okay by me in America!” However, once I got onto the net I downloaded the mp3 from somewhere. It has kept me going, until now. The fact that Anita played the 1986 World Cup theme, made me think that maybe, just maybe someone had captured the World Cup ’94 intro titles from the television. I searched around hopelessly. Then I hopped on board the TV Ark and subsequently find the World Cup page. Luckily for me now, EveryHit.com have put together a definitive list of World Cup songs and include all the number ones during the three weeks of the tournament. Fantastic! 🙂 One of my favourite childhood movies was shown yesterday afternoon. Chitty Chitty Bang Bang, has won a special place in my heart. Mainly for the fact that movie takes me back to the carefree time of my younger years. It is movie which I really want my younger sister Julie to see. But unfortunately her mind has already been poisoned by Nickelodeon. It is a shame really because compared to some of the American imports that have flooded onto the channel, this would be a movie that can take on the might of Pete Engel and co and come out on top. I am so glad I grew up when I did. The 1980s were a fantastic time to be kid. The American shows that were shown on TV on a Saturday afternoon were classic. No, they were beyond classic they become legends in their own right. The A-Team, MacGuyver and who can forget KITT in KnightRider. None of this trash they show now. Quality programming for children that would not be brainwashed and wanted to watch something that was highly entertaining. I am so sorry for these young’s ones today. I better stop myself there, before I start to feel as old as I sound. Puerto Rico My heart’s devotion Let it sink back in the ocean Always the hurricanes blowing Always the population growing And the money owing And the sunlight streaming And the natives steaming I like the island Manhattan Smoke on your pipe And put that in! I like to be in America Okay by me in America Everything free in America For a small fee in America

All in My Head
Raphael Lake
3 days

Get Out My Head - Swarmz & S1mba Remix
Shane Codd
3 days