Skip to content
This date was just a meaningless day of Fall, five years ago. Little did we know how often the phrase, “nine eleven” would now be used consistently in conjunction with the war on terror. As it is a quiet Sunday evening, do not worry, I will not be going all political on you, so please stick with me. I have, tended to both avoid the subject of the terror attacks on the Twin Towers and to blog on this fateful date. Yet, this afternoon, I was watching the anniversary coverage on both Sky News and BBC News 24, and thought it my duty to pay my respects and reflect. Thankfully, I have never had to face a human tragedy of this scale and have nothing but the deepest heartfelt sympathies for all those who lost their lives and gave their lives helping to save those trapped. I believe the images from that day will live on in our minds forever, watching live news coverage as the two towers came down in a few seconds. Crazy. That is the only way I can describe as we watched a pivotal moment in history unfold before our very eyes. While little has come to affect me directly, my thoughts switched to my cousin, a cabbie in the city. But knowing he was always working the nightshift, it was some consolation, when we did hear from him. Was that really four years ago? It does not feel as long ago as that. So much has happened in those short few years. Most of which has been documented in this blog. Then again, that is only my self-centred universe, rarely taking in the true reality of the rat race in the rear world. They were reading out the names of all the victims this afternoon, at ground zero. 2,479. Insignificant when placed on the page, because the victims are more than numbers, they are more than just a name on a list. They were human beings, with friends, family, lives of their own. Taken away, for reasons above and beyond them. We should all remember the victims of the terror attacks and pray that such events never unfold before our eyes, ever again. Thanks to Nazma over at Something in Between has passed on a Music Baton to me, so here goes. I will be as honest as possible. Total Volume of music files on computer: My world famous mp3 collection contains, 13 GB of singles and just over 200 albums. (you can find out more over on the audio page. Last CD I bought: Divine Inspiration – The Way, January 2003, charted at Number 5. Song playing right now: Bow Wow ft. Ciara – Like You Five tracks I listen to regularly: (most of this information and much more is available over at on my Last FM profile) Michael Jackson – Human Nature Sugarcult – Bouncing Off The Walls Again Christina Aguilera – Genie In A Bottle Clay Aiken – The Way Mariah Carey – We Belong Together That is me done and it is my duty to pass this baton (torch) on to three people: Sippy, Terry and Hussein. 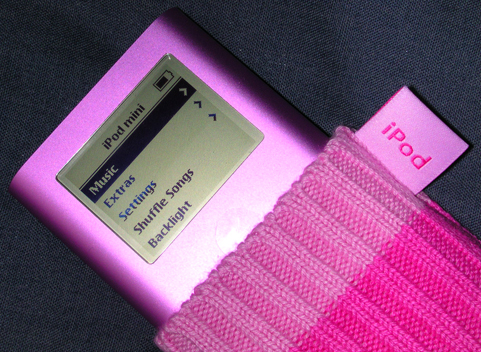 Talking of music, I finally received the iPod Mini last week. I bought the pink 4 gigabyte edition for my sisters, thanks to a tantalizing, not be missed offer. Bought to me by the guru, Hussein. He also recommended the iPod socks ahead of any cases. That was a sound recommendation, Personally, you will know that I avoid these popular consumer fads, and believe the iRiver is better product. Just a shame, the everyone else enjoys jumping on the Apple bandwagon. They have been going about having some portable music device, so they finally have it (if they learn to look after it, that is!) I also have no need for an iPod. I do not do any travel or sports which could make use of music on the go. I am quite happy with my ten disc CD changer and MP3 CD head unit in the car. In total, I can only listen to around four songs (or one song four times!) on the way to and from work, so I have been very picky on my selections. Think it was time I burnt myself a well earned CD after a busy weekend of driving. Should be able to fit a quick SWOS game too! 😉