So I reach the end of my first week of hosting with 123-Reg. What can I say? It is great to not have to give out a separate link for the banner free hosting. The orange UK2 banner has now a place in the back of my memory and no longer a blunt appearance at the top of my web page. Overall, I have created new e-mail address and started a major marketing campaign. Now my blog has a settled home, I feel I need to go out and get as many readers as possible. This market blitz begins with Technorati, with whom I have registered. Plenty of work to be done, however. So, if you find a blog that is worth reading, please drop me a line. Anyone who links to me, will get a link back, again just get in touch.

While I tend to discover most new music on my own, there is a time when others push me in the direction of new material. This blog is littered with examples of this. Last week, one of my new friends on MSN, recommended Bow Wow ft. Ciara – ‘Like You’. On this recommendation, I obtained the track but did not have a feeling I would like it. I listened, out of good faith to my friend. Sure, on the first listen, it was a song that I liked but did not feel a big buzz for. Well not instantly. On my trials around the web, I discovered the video being played on various profiles on a site, made up of mainly American users. It was now, I realised how much I thought the song was great. So much so, that I included it on the CD I burnt last Sunday. It is difficult to describe the sound, perhaps smooth RnB. Bow Wow’s voice blends well with the soft sugary vocals of Ciara. Yet again, an artist that takes not two but three attempts to win me over. I had not liked her edgy hip hop flavour singles, but here, on a slower, more heartfelt track, she feels right at home (to my ears at least). From the album, Wanted, Little Bow wants to tell the world he has grown up!

I have to dedicate part of this entry to Sippy. Forever my dedicated friend, he came to my aid when I needed it most. Without his help and at times persistence, I would not be here now. I would still be stuck in the void between no domain and no host. While I thank him for hosting my blog temporarily for a few weeks, I would also like to thank him for his constant advice during this time. I was lost and glad to have the experience and expertise of a web programmer, working in the commercial field for some 18 months. Someone, with that knowledge and understanding. What I kept asking about was the time delay, thankfully my friend knew exactly the time it would take for everything to fall into place. It has and I can now look forward to many happy years here. (Until perhaps the day comes when I am no longer part of the blogosphere).

There are several topics regarded as no go areas for general public discussion. Politics, music, football and religion. Perhaps, as these bring out the greatest passion in human nature. You will argue all night long about something you believe deeply about. I am by no means the most religious person in the world, but I have strong beliefs. Today was rakhi. A minor but notheless important religious festival in the Hindi calender. Happy Rakhi to all my fellow Hindu cousins out there! 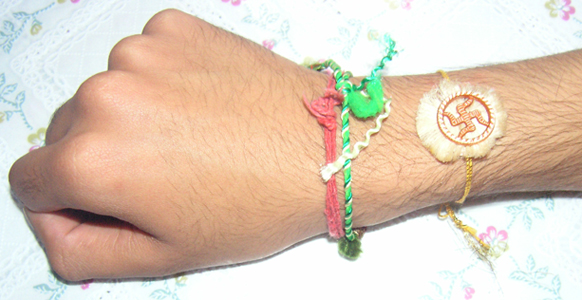 England gave a pathetic performance against Denmark on Wednesday night. This is the first time I have seen England hit the self destruct button in five years. The last occasion being our exit from Euro 2000. For the first time under Sven, we have serious questions being asked about his man management and motivation skills. Sure, it was a friendly, but it does take away that fact that you are representing your county. Pride of place, as a moment of honour, to wear the three lions shirt. While the excuse that it is too early in the season for such games, international football is different from club football and you need to show desire and commitment, regardless of the time in the season. Thankfully, I see this being the wake up call, the FA needed. Time to make some changes, across the park and put together a team that looks both deadly in attack and solid at the back. Surely, if England are to go to Germany as favourites, they need to prove their star billing into a creditable squad selection. Over the many years I have been following England, this team although perhaps the most entertaining going forward, has major question marks at the back. Rio and Sol are perhaps the only ideal pairing, organised and strong. While Glenn Hoddle had his critics, I feel he was the most shrewd in his tactics and squad selection. Heading into the World Cup in France, he left out Owen and Beckham, with journalists heavily on his back about this failure to play the star players from the start. Yet, now with hindsight you can see his thinking, of saving them for the bigger stage. I don’t see Sven using this sort of tactic. His system is solid at the back, hit them on the counter, score a goal, protect the lead, go for another goal and then hang out for the win. While this might work in club football, it is not really realistic at international level. It does not compensate for a weak start, falling a goal behind. England need to show confidence from the off and be able to control the game. Against the Danes we were played out of the game, particularly in midfield as they pushed forward to break down our defence. We lacked the holding midfielder, screening the defence, with Beckham cutting inside to try and cover. Overall, we looked like a displaced force, lacking any ideas, and lucky to get a goal back through Wayne Rooney, down more to lack of concentration by the hosts. Hopefully against the Welsh, we will be more alert and realise our World Cup place is in doubt and less of a certainty.

Underneath the Tree
Cast of Zoey’s Extraordinary Playlist
10 hours

Still Love You
Another James
11 hours

All in My Head
Raphael Lake
11 hours