Skip to content
On the late shift at work this week, I decided to make the most of my free time in the mornings. A sensible person would have much better use of this time available to them, and spent it in bed. This was not something I wanted to do. Not with one of the world’s most picturesque cities to go and explore. I would be foolish to waste the summer, working and not taking in the many sight seeing opportunities around me. There was my brief. To get into Central London by 8am and then go and explore, take photographs and ultimately to find inspiration. Inspiration for my blog, to feel, to understand, to be moved. Monday morning, I headed for Piccadilly Circus. Hoping to capture the mood of the city after the weekend, and with the heavy working week minutes from being truly upon us. Little did I know that somebody else would be recorded, famous places down the street where I work. How was I to know this was to be his first calling point. I walked down the road, to Leicester Square, to see a busy clear up operation coming to an end. Delivery vans were making the first calls of the morning, with a general relaxed and calming overtone, which I was struggling to understand. As I crossed the square, there were a few early commuters scurrying towards work, but apart from them, there was nobody around. A few people grabbing their first dosage of caffeine of the morning, so I decided to do the same. Although several more reasonable options were available to me, I again had an urge for Starbucks. I headed up towards Tottenham Court Road and then passed Goodge Street tube station. There was a small cosy branch, which invited me in. I had my mug of tea, then headed to the underground station. What to do? I wanted to take in the views from the river. I was considering at first to go to London Bridge, but headed a few stops further down the Jubilee Line to Canada Water. These new tube stations lookso futuristic and break from the mould of claustrophobic Victorian model. Time was running out, I had to get to work.

Tuesday, was the day, which I had planned very differently. In the end, as I started at 9am, I could not really make anything out of an odd hour. So I just headed to work, early instead. Not to know, home sweet home would not be a prospect for 7pm, as it should have been. Wednesday, I headed to Embankment. This is the station at which I change to catch the Circle or District Lines. Just outside the station is the Golden Jubilee Bridge. Walking across to the South Bank, you can catch some nice glimpses of the London landscape. Sitting down on a bench, I took in the beautiful sunny morning. As the rest of the rat race, dashed to work, before me. 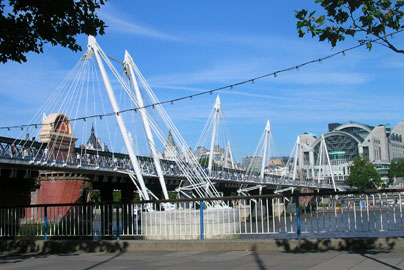 Just behind the bridge you can see the Palace of Westminster before which stands the British Airways London Eye. I headed in that direction, east towards Westminster Bridge, camera snapping as much I could. 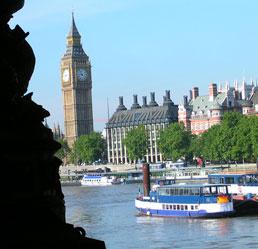 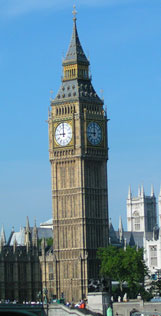 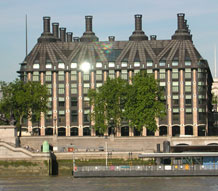 Crossing over towards Westminster tube station, I took a final few pictures of the observation wheel, before heading into work. It was coming up towards 10am, and I had no desire to arrive late. 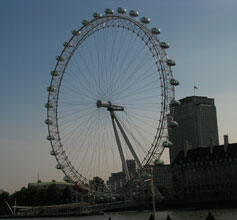 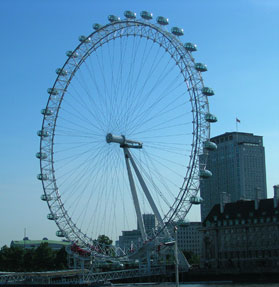 I had made the decision on Monday that I wanted to come down to the Docklands and more specifically Canary Wharf to take some photographs. Would have done this on Monday, but by lounging around the West End, and drinking my tea, as if I was on some kind of holiday, meant I did not have the luxury of time. 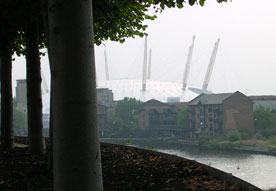 Did you go to the Millennium Dome? I did not. Even though there was talk in 1999, within my circle of friends of going down when it opened that December. Little happened on that front, talk quickly died down, as it did with us going to watch England play at Wembley. 🙁 I wish I had gone to it, at least then I could have given my true opinion, rather than just one based on thirdly party information. A few years ago, my friends did talk about going there for a big clubbing event on New Years Eve. I am not sure if it actually did take place, due to security issues, but I remember back at University someone mentioning it, so perhaps it did. From Canary Wharf, you can make out the Dome in the distance. Walking around, I could see there was a high security presence across this business district. All cars were being stopped and searched, with only those with valid passes being allowed through in the underground car parks and offices. Something suddenly crossed my mind. Here I was, an Asian guy taking photographs of London’s biggest landmarks at a stupid time in the morning, when in reality I should really be somewhere else. None of the security guards stopped to question me, or find out why I was taking photographs. I was just regarded as some tourist, taking the offbeat track. Great to see, so much money being pumped back into the development of Canary Wharf. Hopefully it will grow to be a place, I can enjoy to come and visit, when all the building work has finally finished. 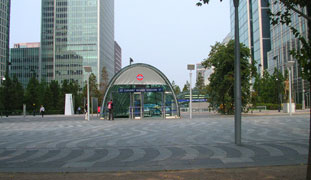 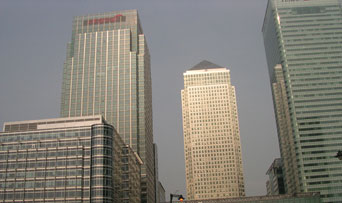 For a split second, I thought I was in America. With these towering skyscrapers all around me, and small intersections in the built up area. Slowly I came out of my daydream, looking at my watch, it was coming up to 9.30am, I had to be on my way. I was going to say that it was that man again, but he is still very much just a boy, help Arsenal clinch the Community Shield earlier this afternoon. Picking up just where he left off last season, glad to see he is knocking on the door and proving a great option for the left of midfield. Expect a fine review and the latest on the Vieria situation from Arse Blog. Overall, I was impressed with Pennant, who obviously has learned many things from his season loan at Leeds. Another player I enjoyed watching was the young, Fabregas. He was quick, breaking up Manchester’s attacks and then quickly switching the play with great vision and killer passes. Can you believe he is only 17? Bring on Everton!