Skip to content
“The only way to have a friend is to be one.” If this is the case, I would like to say something that I rarely do. We rarely, state the obvious. But I would like to say, thanks for Daz and Vij for being my friends and I hope that I have been a friend to them. 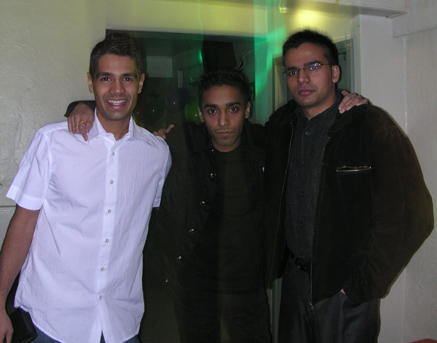 You may recall, that a few weeks ago, I brought you the antics of Upgrading Operating Systems. Well as the saying goes, there are two tales to every story. For those that fail, there are those that succeed. So therefore, it is only just for me to include a picture of a small if somewhat smug, self-assured relieved Paul. Proudly showing a broad smile, while his new PC hums contently in the background, casting some psychedelic blue onto his desk.

Arsenal turned their quarter final against Portsmouth at Fratton Park into an exhibition match. Particularly in the second half when they showed true class with some nifty (is that a word?) passing and interplay. At this point, I would usually pass you on over to the Arse Blog, however he has not updated his website this evening. Perhaps he never got those painkillers in the end. So I will just point you in the direction of the full match report from the BBC. The most significant things that will happen in your life, will be those that you least or never expected to happen. This wasn’t something I agreed with in the past. However, fate and destiny are powers beyond that of a mere mortal. If I could have foretold my future, it would never have been written like this. Maybe one day I will know what should have been done and said, to change the course of history. That is in the lap of the Gods. What I do know is that, both things you want, things you need and the things you avoid, will all in time come to flourish. Perhaps not completely the way you expected. But he with great expectations has too low self-esteem. Do not think, what I can do, think what has yet to be done by others?

Once In A Lifetime
All Time Low
9 hours

I Don't Know Why
NOTD
10 hours