Skip to content
In between my two interviews today, I was at home to grab some lunch. While scrolling around the music channels on Sky I came across VH1. It had very much gone over my head, it was the final day of the sacred Immortals Week. I had flicked through the channel throughout the course of the week and very little had been on worthy of watching. Of all the certainties at college, there was one argument which everyone knew Teg would fight to the bitter end. While most of my peer group detested, the King of Pop, you would be surprised to how many listened to the one album which reflects him most effectively as an artist. That was then and today is a different story. Michael has made several appearances on my site already, even in the past year. Here he is again. Smooth Criminal, which one of my dearest friends recalled as their favourite MJ number. Watching the video again, and hearing the beat of the music, I smiled as my mind flashed back to a different time in my life. Maybe I can’t be sent back to 1985, but 1988 would be a very close second destination. 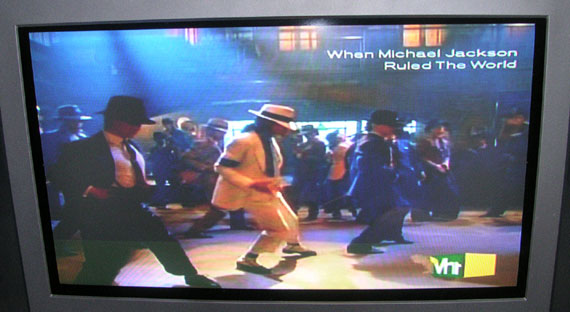 I was surprised to see an e-mail from Paul, in my Inbox. He rarely contacts me these days, with work and other projects on the go, so he is not at fault. I had e-mailed him on Wednesday following a quick read of an article from the Next Generation on Guardian News Blog. Almost exactly a year ago, Paul had given myself and Nav access to his treasure trove of digital material on a secure hard disk. Among the cartoons, mp3s singles, albums and software was a gem. Providing us with a special preview and running commentary on this particular video clip, I was surprised to discover, William Shatner giving a smoky rendition of Elton John’s “Rocket Man” before a live studio audience. This gem has not remained as elusive as my ex-house mate had hoped. Now available to view on the web by anyone who wishes to see such a act of pop vandalism. Paul’s response to my e-mail, was anything but. Rather than discuss the dizzy heights and success of Bill’s pop career, he posed me a question. Have you heard Michael Jackson’s new single? Of course I had not. I needed no invitation. I was away. I searched the web, various fan forums and other avenues, I had some of the answers but not them all. The single, “We’ve Had Enough” is the final track on the recently released, Ultimate Box set. This 4 disc audio collection includes rare studio demos and tracks that never made it to the final album cut, plus an previously unreleased DVD from the 1992 Dangerous Tour. Yet, armed with all this information, I still had not heard the track, so I headed over to the Sony site and listened to a thirty second snippet. It started to make sense, the fans had not been wrong (they rarely are). This was a return of something special. We wait for the resurrection. May that day be upon us soon.