Skip to content
Preparation is important with everything in your life. Always “Do you homework!” That is something, that rings in my ears regularly. So this morning, I set off on my daily commute, as if I was going to work. This dummy run, was purely to check the timing of the bus, train and then tube services to my new place of work. Also to plan for any possible disruption and have a backup plan. Overall, the journey went to plan. I picked up the bus at 7.30am, outside my house and then caught the 8.07am Chiltern Railways service to London Marylebone. Then, I find that the Marylebone tube station is closed from 7.30 until 9.35am on weekdays for work on the escalators. Never mind, Baker Street is literally a stones throw away. I think it was at this point, I lost some valuable travel time. In London a few minutes can make a difference. Anyhow, not a major problem. From here, I took the Bakerloo line all the way to Embankment. It is here, I transfer across to the Circle or District platform. Two stops down the line is my exit, Blackfriars. I walked past the office at 9.33am, a few minutes behind schedule, to see a familiar face behind the reception desk. I noticed a few people enter. Then my mind was racing. How many of my potential future colleagues, had I perhaps seen on my tube journey? Had we made eye contact, perhaps stood next to each other, completely unaware of the connections that would be made next week.

Having completely my covert surveillance operation with some success, I decided to stick around in the neighbourhood. Having bought along my digital camera, to take some photos, I headed towards St. Paul’s Cathedral. Literally around the corner, I noticed a hoard of tourists patiently waiting to be taken on their guided tour. Obviously I do not want to give away the exact location of my work place, but those of you, whom know London well, should be able to make an educated guess. Deciding to avoid the hassle of the foreign visitors to our capital I searched for some good vantage points to take some photos. There were a few, but as I headed around the corner, I saw the Millennium Bridge. Great, a fantastic spot to take some photos of the City Skyline and also images of the river and surrounding area. I took some 30 images in total, but below is in my opinion the best. On my trails around the web, I have discovered, Andrew’s Photolog, a unique collection of candid shots taken across the city. The penny drops as I realise the potency of a black and white image. 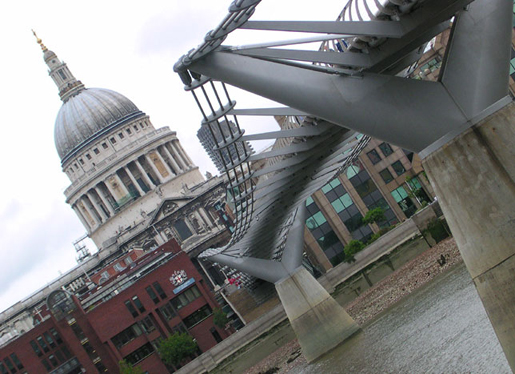 At this point, I suddenly had an urge to visit Starbucks. I am not a coffee drinker and actually personally detest the drink. (How can people drink that first thing in the morning?) Anyway, I still wanted to head over there. So I decided upon the branch in Leicester Square. I felt rather silly at one point, ordering a standard English breakfast tea, with a menu showing the delights of the coffee bean from all corners of the earth and available in every imaginable variety. This was only my second visit to a Starbucks. Having visited the Leicester outlet in June 2001. I enjoyed my medium sized tea, and double chocolate muffin. Then headed off back into Leicester Square, wondering what to do next. I decided to head north, and visit Brent Cross Shopping Centre, with a friend. First time here, but no comparison to the impressive BullRing Birmingham. Then caught a bus to Harrow, some twenty minutes away. Had lunch at in the patriotically named, St. George’s Shopping Centre. Then decided, it was time to head back home. What do you do when you see an old friend? I saw an old school friend this afternoon, as I was heading back home. He did not see me, as he was too busy chatting to his friends, but I saw him. It cross my mind, to at least say hello, but I did not know what reaction this may provoke. Also, what would we say, beyond, the formal how are you? I therefore made the decision to just walk on by. If it had been someone else, I may have gathered the courage to at least say hi. But this was an exception to the rule. We parted on bad terms and I feel he may still bear some grudge, even though it was over two years ago now. What surprised me, was the fact that he was still kicking around in Wycombe. A town he hated to the core, and boiled up several plans of escape. All which had ended in failure, with his subsequent return back to his hometown. I hope he is doing well. I hope one day, he can learn to forgive me. For, for whatever harm I may have done.