Skip to content
Eastenders, I haven’t mentioned my favourite soap for several months now. It has been so long, that I’m going to have to check the Updatesand find out exactly when I did mention the show. The update from Saturday 1st March 2003 was when I last did. Although, some of you out there, knew what was going to happen, I am one of those of us who prefers to be oblivious to all the press coverage and articles in Heat magazine. What is the point of watching the show, if you are know what is going to happen? There are some rather strange soap fans out there, I must admit. However, I felt that Andy didn’t deserve to be treated in such fashion, to have his big day ruined, his mother’s birthday (if I recall correctly, not quite sure, answers on a postcard…) and more significantly have his heart broken. Punching Alfie, would have brought some temporary relief, but the numbing of pain is short lived. So, ‘Kathleen’ and Alfie head of into the streets of London, leaving the fracas at the church far behind them. Again, I would like to thank Tony Jordan, for remembering what the most important aspect of any story. True love will always prevail and that there are times, when we like to see the ‘loser’ win. Perhaps, because their prize is biggest of all. Many site updates planned over the weekend, including audio, links and photo gallery. As I promised earlier in the week, went to see The Matrix Revolutions at the Warner Village Cinema, Meridian Park last night. Overall, bringing the film into context, it is one of the more enjoyable and aesthetically pleasing trilogies I have seen in recent times. Rather than go into several pages into why I enjoyed the film and thought it matched the first in parts, and have my Inbox flooded with abusive e-mails, I thought it best, my fellow travelers, expressed their views.

Nav’s views were summed up in two photographs. “I loved the special effects, shame about the plot and lack of exploring the philosophy.”

Paul, is still quite undecided. “Money took over man, and they didn’t do the whole idea justice. It is in the hands of some other ‘Chosen One’ to resurrect the franchise and take it to the next level.”

“An opportunity knocks, for you to seize with both hands. But success, the dollar bill and fame gets in the way of your goal to create a truly great film trilogy to match the supremacy of Star Wars. Instead, you produce, one great film and two average films, released close together, to keep those revenues high and bank balance pretty!” So as we headed off into the cold Leicester night, we had come to realize that, “Whatever has a Beginning, has an End…” 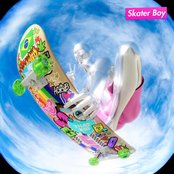 7 Minutes in Heaven
That Kid
3 days

Back to the Oldskool
Dimitri Vegas & Like Mike
3 days

Do Me Right
Anton Powers
3 days

Where She At
Aamir
3 days