Skip to content
Today, was the day. Things should have been different, I should have been there. I know in an alternate reality, I would have been there, perhaps with those who I no longer see or speak to. Today was not a day for such misplaced regrets and looking to the past with a sense of loss. It was about making a change and doing the decent thing, helping your fellow man. Perhaps for the first time in my life, I felt selfless and wanted to do something to help others, more than any point previously in my life. The cynics will say, that a punch of concerts around the world will do little to change the life of a continent. I beg to differ, I think raising awareness, opening our eyes to the plight of these people, gives us a opportunity to want to help others like never before. Yet, I think it goes beyond the political will of eight men. The problem is far greater, the problems deeper rooted and it will take thousands if not millions to bring a prosperous future to the one place on this planet that has lost wealth, while the rest of the world continues to enjoy it. Much more than a story state of affairs. While I was watching the television coverage, late on Saturday evening into the early hours, I tried to picture the number of children that had died, in pointless circumstances due to poverty. When you consider that the suffering is preventable, you too want to make a difference. While I had every opportunity to sign the petition online, but I wanted to make my position clear in public. I had already seen the Live8 petition stand when I had arrived. So, straight after the movie, I headed across to add my signature. The process was rather amateur, a young blonde girl was using a notepad with 3G card to add the stack load of signatures to the site. Having signed, I felt I had gone some way to making a difference. The reality was I was gutted for not being given the chance to be there, but I felt helpless having to watch the live footage on television. 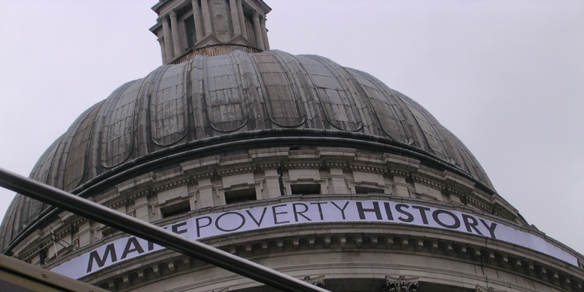 Kiss from a Rose
Seal
2 days

HIT ME up
Stefflon Don
6 days

m to the b
Millie B
2 weeks