Sure, I admit it. I can be downright annoying if I want to. I would personally call it being, persistent. Those under this pressure from me would disagree. Yet, there is always a good reason that I am going to such lengths because I truly care. A case in point, is my dear friend Nav, whom I talk to online on an almost daily basis. He has a blog, but in recent months it has been somewhat neglected. I have been at him, constantly to get back on that horse and get back to writing his online journal. All these requests have fallen on deaf ears, but understandably so. My friend has much more higher priorities than sharing with the world what is on his mind and going on in his life. The unlikely motion to get him back where he belongs, in the blogsosphere, was not even another human being. It was that stupid, annoying frog. Don’t believe me? Just read here, and then read again to confirm it for sure. Great to see you back Nav. Hope this short hiatus has done you the world of good and you will be back, bigger better and stronger to continue to dispel us with your words and stories of wisdom.

Finally, on Thursday my new executive leather chair arrived. It was well worth the wait, even the three hour traffic jam. Much more comfortable, to support my back on those long nights spent on the computer. The fact I can do silly childish things like spin around my room, make it the perfect piece of furniture to compliment my room. Sure, it deserves to be shown to you all, but I thought long and hard on how to capture this moment in pixels. A photograph of me, sitting on the chair, working on the computer would have done little for the imagination. So instead, I took the hidden acting talents of my ten month old cousin (or is that first cousin) Ramzi, to literally stand in (or is that sit in?) for me. I think you will agree that he does pull off the job remarkably well. Just got to wait for him to start talking and then we can discuss the finer points of peer to peer software downloads. 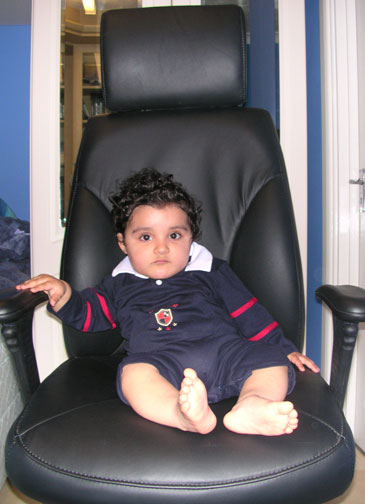 International friendlies, most people I know do not see the point in them. Nothing is at stake. I disagree, the friendly gives the manager a chase to try something new, knowing that if it does not work, it does not matter. Long enjoyed international friendlies, particularly against non-European sides that we do not play on a regular basis. This evening was a case in point, with the first match of the tour of America. I have a great deal of respect for the US soccer team. Particularly after they were not even mentioned by the BBC before they smashed Portugal 3-2 in the World Cup, three years ago. They have been improving ever since, it is just shame the country has a whole still does not give the sport the much needed attention it deserves. Perhaps the arrival of the England team would begin to change the tide in that thinking. Even though it was a understrength side being selected, I looked forward to some entertaining football. Overall it was from a neutral perspective but at times England did not show the quality of a time pushing to win the biggest cup of all, next summer. Thankfully, the Americans still lack that cutting edge in finishing, which will come with experience. Otherwise, it could have been yet another one of those, shock defeats.

Away from the football, there is something I strongly admire or am even envious about when it comes to the Americans. Their national anthem. While it is perhaps the greatest and most recognised national anthem in the world, it is the sense of patriotic pride it distills in all those that are lucky enough to represent their country, that is most striking. When God Save The Queen, was played in the Soldier Field stadium, none of the England players, that I noted, even attempted to mine the national anthem. Then we had the home team, and it was a complete contrast. Each member of the team, the full eleven on the field and subsitutes, turned to face their left and look up, proudly at the flag, holding their right hand against their lapel and singing with firm voice, the ‘Star Spangled Banner’.

This was a thought that had got me scrabbling for the anthem online. I already have the Whitney Houston version of the song, which is perhaps some of the better quality versions. A quick search on Google bought me to the most famous instrumental version by the rock legend, Jimi Hendrix. Yet, the one which I find is the best, in my humble opinion is not from the distant past of 1969. Instead it is by the 2002 American Idol winner, Kelly Clarkson. What set this apart from the other version was the fact it was pure vocal, no instruments, no big band, no big chorus. Just Kelly singing the song with the great passion she has for music. Amazing.

Under normal circumstances, what is said online is private. On this occassion, I am willing to sacrifice the privacy for the solemn words of my friend, Nav. Yes, please do not judge him purely his blog. “So our national anthem, God Save The Queen focusses on a time when they would feel special by having a great leader like the Queen to lead them so pray god to keep her safe and lead them into glory”. Great sentiment, shame it does not make a great song.