Skip to content
Let me start with my final night in 2005. It had been planned for a few weeks now, but only now, was I really excited. It would be the first time I would be out at a party since 1999. (That makes me sound old and sad!) Generally speaking I spend New Years Eve at home with my family or around a friend’s house for a small house party. Nothing spectacular. I had been to the venue, The Roof, once before on Friday 17th June with Pav and a few friends. Even though it is perhaps not the most elegant of places, I would be seeing in the 2006, with one of my closest friends on the decks and many friends for company. The big TV screen right by the DJ booth, was screening MTV Dance, and in the top right hand corner was counting down the remaining hours and minutes of the year. The place was packed out, with hardly any space to move, let alone dance. When I found Pav and the rest of the crew, they were right where I expected them to be. Right next to the speakers at the heart of the dance floor. So this was it, this is how I would see 2005 out and 2006 in. If you had asked me even a few months ago, that I would be celebrating out in Maidenhead (of all places) I would not have believed you. But hey, this is the way the cookie crumbled. I had a really good time! There were several people from Pav’s forum, whom I was meeting for the first time. Great to finally put some faces to some names. At the stroke of midnight we celebrated to the tune of. Wait for it. John Paul Young – Love Is In The Air Don’t worry, DJ Breezy was not on the decks and therefore not responsible. His set did not start until 1am. My favourite moment was just prior to Pav taking over the dance floor, a remix of Blue Monday by New Order. Which then eased us in for the next hour. The first half was very good, with Pav playing some great trance remixes of some commercial tracks, which I had heard or seen recently. The best of which, was the Risque 2 vocal mix of Herd & Fitz featuring Abigail Bailey, ‘Just Can’t Get Enough’. I took my Sony CyberShotU along, so expect some photos to be posted online soon. Towards the end of the evening a live mix CD was thrown in my direction. Wow, a souvenir from the night and end of 2005. 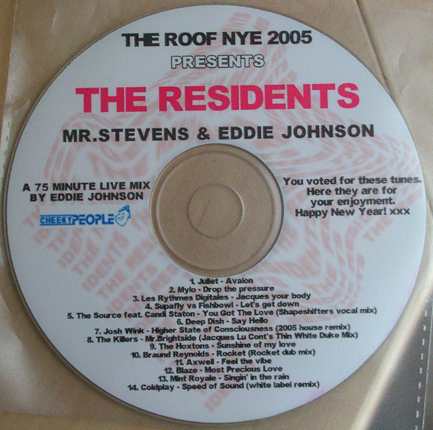 In other news, for this quick round up, for my first entry of 2006. My ticket for the FA Cup tie against Cardiff arrived on Saturday morning. Fantastic! So I have made the hat-trick of games at Highbury in Premiership, League Cup and now FA Cup. The only element missing is a European fixture. I know that my chances of getting the visit of Real to Highbury is next to nothing, but I always live with hope in my heart.

I have been in the East Midlands today. Well Nottingham to be exact and actually arrived on Sunday afternoon. It might be becoming some strange ritual, that I go shopping the day before I have to head back to the office, after the Christmas holiday. (For reference, see Monday 3rd January 2005.) Yet, my story starts a few hours after my arrival. We were visiting my sisters’ at their University house in the centre of the city. If you don’t know me by now, then I think I have done a poor job demonstrating my geekyness I cannot be without the internet and the thought of not being online for over 24 hours, had been soon shivering. So I went onto my sister’s laptop to see what I could muster. There was a wireless connection in the vicinity, but only some of their friends had been able to make use of the connection (by sitting on the stairs). After some fiddling around and removing some software and adjusting a few internet settings. I could not believe my luck, I was connected up to the wireless connection. Completely insecure. The next shock had me completely dumbfounded. I could even access the web based interface of the router. There was no password restricting access. If I really wanted to be mean I could lock the guy out of his own router. Although a complete hard reset would eventually resolve the matter and restore factory settings. By now I was online and using MSN and explained my findings to Hussein. He then pointed me in the direction of his blog. An entry from two years ago, so expect that to be worse now. Although both my sisters are well pleased. They can piggy back on this free broadband connection and with an 8mb download link with BullDog, I’m sure their usage will hardly be noticed.

Then, last night I experienced my most uncomfortable night of attempting to sleep ever. I was on a small two seat sofa and never felt in the right mood to drift off to sleep. Back in 1997, I slept on a cold stone floor in India, while we made a pilgrimage to a temple, high in the mountains. I can firmly state that that nights sleep, almost ten years ago was more peaceful than last night. How has Nottingham City changed since I was last there. Trams. They will have to wait for another time, I am tired and really need to get some sleep. The final thought goes to Doug. (Expect more of these in the future!) I feel the same way about New Year Resolutions, they are a waste of time. If you are going to make a change in your life (or lifestyle) why not just go ahead and do it, rather than wait for that magical moment, which is turn of the year? As always with these things, they are easier said than done.

Damage Each Other
Steve Brian
19 hours

Damage Each Other
Steve Brian
2 days