Skip to content
So we reach the first Friday of 2005 and not a minute too soon. Even with the comforting though of a four day working week, it has been long haul with many things going on at work. Further observations will shortly be posted on my work blog. Only seven days into this new year, and I find already a backlog being created for my blog. Firstly I need to tie up some loose ends from my previous entry. Like a newspaper editor rushing to meet the deadline for the first morning edition, I was keen to get as much crammed in. However, this has left some gaping holes that need to be filled. Do not worry, this will not take too long and then I can bring you up to speed with more recent events. Having made the primary purchase in the morning, I felt quite pleased with myself. Yet there were still secondary and even tertiary targets to seek out. Over the Christmas period I had been extremely ruthless with my tie collection. Many had now begun to show their 2 year age, and usage over placement and subsequent City job. I needed to buy a few more ties, having already added three blue ties from Next in mid December. Most of these ties that were now cast to the charity shop, had been purchased on Wednesday 12th June 2002. On that day too, I came to Birmingham from Leicester. On that occasion, I went to Tie Rack and I was keen to give the chain some repeat business. The signs however did not far them well. There are three stores (to my recollection) within the city centre, one in each of the respective shopping centres (mall is such an American word and unfit for use as a description. In the World Cup year, I had used the Palisades branch and on this occasion, I wanted to make use of the BullRing. I was disappointed in the range available, in what must be their bigger branch of the three. The ties were bland, conservative and unexciting. My ties never make an extra exaggerated statement, but do reflect my personality as a person with a high standard dress code. Other stores did offer ties but again, did not have that special magic which made me want to pick them up. My brand loyalty was shining through and I wanted give Tie Rack another chance. While in the Pavilions Central later in the afternoon, I just headed in the direction of the store, not expecting anything, if I am honest with myself. First impressions proved to be meaningless. The store had a few customers inside, and I could not see any of the pure silk ties. Instead just the usual monotonous selection, until I looked further around. Then a few Italian Frangi ties were spotted and I just had to make a decision on colour. Feeling that my tie collection lack scope for colour, I chose a light blue tie with what can only be described as yellow oxygen bubbles pattern and a black tie (which is always useful). Bringing my grand total of ties to 9, bringing some relief to the fact that I would no longer be hunting around one morning for a tie I had not already worn that week! As I came to the till to pay, I noted a Chip and Pin terminal on the checkout desk. Would this be used this time around? To my surprise, I was asked to enter my pin, although apprehensive found the whole experience simple. Although the gentleman who served me still scanned my credit card through the conventional till after the pin had been verified. Once I was handed my receipt, I noted that this was future for all my future high street non-cyber based purchases. No longer a scribbled copy of my signature. Time will tell if the pin truly is mightier than the pen. I am still to be convinced. 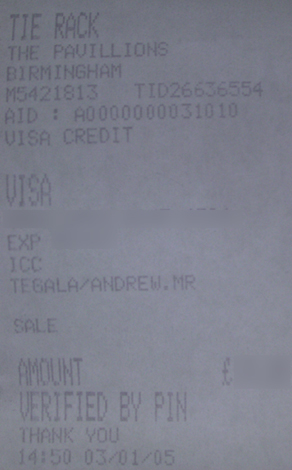 Now I take a leap towards the end of the day, sorry but this final segment of the day is important, on various levels. So bear with me, on this short but entertaining ride home. The first day back to work, was becoming a realistic thought, as the sun set around me, and I entered a twilight period with all the shops switching on their lights, the street lights coming on to compensate for the darkness. Looking at my watch, the time was ticking away as I headed towards Moor Street station. Trying to block out the thoughts of the real world and the fact, some twelve hours later I would be sitting at my desk and taking phones from clients. Moor Street is a traditional style railway station, with two platforms devoted to the old steam engines of the past. Ended back to the operating platform, I realised I was on the wrong side. Trains only headed further north to Snow Hill and beyond. Just as my mistake became apparent, a south bound Chiltern Clubman pulled up opposite. It was heading to Banbury, and if I had run across I could have boarded with plenty of time to spare, but I decided to wait for the train I had planned to catch home. The station was surprising busy for a Bank Holiday, with many people waiting to catch trains. There was a group of families with young children, a few students, and a few courting couples. The answer came to this, with the sound of an approaching train. The local service, provided by Centro on dirty, worn out trains were the chosen mode of transport for these people to get to their destinations in and around Birmingham. I can think of traveling in a slightly more comfortable and reliable way than this. I did not have to wait long for my train to arrive. Punctual, as expected, and surprising for a holiday, at 17.21 precisely. I jumped onboard and was subsequently questioned by a few passengers about whether the train stopped at their destination. I would have preferred to have been more helpful but I much rather just play ignorant. Even though I had a timetable in my bag, they would spent some time trying to decipher. Quickly taking refugee in a seat, I rushed to get my radio on, listen and switch off from the passengers around me. The train was quiet and there were plenty of seats available around. Even so, many people decided to stand, very strange. I plugged in my ear phones and switched over to Core Control and was amazed at what I heard. The bass line to a popular hip hop track was just kicking in, I had switched on the radio just in time to catch the song. Smiling, I drifted into my seat, looking across at the night skyline of Birmingham fade away in the distance. Overcome by a warm feeling, I was heading home, making good time and my Birmingham adventure had come to a close. Just as the lyrics, “You Can Do It, Put Your Back Into It…” rung in my ears. I grew tireless of listening to just the one station so started exploring the airwaves to see what other music was available. FiveLive had football commentary but from the Championship (often referred to as the Real League). So I focused on music stations, with a few new local passed stations appearing on my dial. I switched over to Radio 1 to be shocked at what I heard. It was the theme tune to one of my favourite TV show. What was this? Then I remembered the early chatter on my journey out of Wycombe. This was the Ten Hour Takeover which has become a customary fixture on most Bank Holiday weekends. The version of the A-Team theme that was played was rare, and included an extended version not played on the original television show. Sweet! Intrigued, I listened for the next few hours just to see what the public would select and if any of my personal favourites would be played. It was 6pm by this time, as I had been far too fussy trying to find something to listen to. Next to be played was an Elvis classic, but it was the song queued up afterwards which would be most spectacular I had been hoping they had not already played it but realising that the whole days programming had been devoted to this open door policy, I was less hopeful. The voice that Wes spoke to answered my prayers. “Take On Me” by ‘A-ha’ please said the voice over a crackly mobile line. Wes responded by offering the option to play the September 2000 UK number one cover by A1. To my astonishment, the caller did not have a preference. The abomination of his lack of true loyalty to the original baffled me. Just as the song started, we headed into a tunnel, and my reception was cut to a whimper. Frantikly I tried to retuned the radio, looking out of into the dark, looking for the light literally at the end of the tunnel, it did not come for a while and I sunk back into my seat, realising I had missed this moment. Of course, I had heard the song several times and new the lyrics inside out but the fact that Wes had not given a clear indication of which version he was going to play added to my frustration. We screamed out of the tunnel, and my radio came back to life, just as the song entered it’s final chorus stage, fading to an repeation of the song name. Gutted, that is how I felt. I stayed tuned for the remainder of my journey, hoping that more classics would be played, a few were, but nothing of note. Shame my day had to end of such a minor, insignificant downer. Strange how a song can have such an imposing effect on your day.

Underneath the Tree
Cast of Zoey’s Extraordinary Playlist
10 hours

Still Love You
Another James
10 hours

All in My Head
Raphael Lake
10 hours