Skip to content
I must admit that in the past few days, I have wanted to blog, but I have lacked the inspiration and motivation to actually add an entry. I would of course, apologise for this. I feel it is necessary to do so. I know how important my blog has become to all my reader’s and of course to myself. I was looking for some spark, some event that would bring me back to my computer and bring back the inclination to tell the world what is on my mind and how my day is progressing. This evening, one man, changed all this for me. Regularly readers of this blog will be clearly be aware of the fact that music is important. Behind the wheel of a Ford Fiesta for the second time in my life was a privilege in it’s own right. Then the designated driver turned navigator turned car disc jockey decided that we had been exposed to enough Maxwell to be converted. Therefore it was time for a change. Not just a change in music track, a change in genre, mood and experience. The song had a fantastic 80s feel that I had not heard for many days and was to some extent a breath of fresh air. As I drove back towards Sheffield Street, the song was in full swing and my emotions were completely beyond my control. I must try better to grasp of my feelings when I get behind the wheel of an automobile. Maybe it was the adrenalin rush of power combined with speed. Maybe it was the ability to have power in my hands. I do not know what has made me feel this way. But what can I say, but a thank you to Paul for selecting the track that he did. If everything happens for a reason and God knows the path that we are to take, then it has once again delivered the goods. Ahem! England lost to Sweden, on the manager’s return to his homeland. However it is not the plight of the senior team that is so important to me. For it was the result of the internationals players of tomorrow, that I found far more appealing. Why? Well let me explain something to you. When I started University in September 2000, I was in a heavy discussion with one of my flat mates at halls. I was explaining how I was looking forward to the first Asian player making his international player making his debut for England. I was positive that it was an event that I would see before the end of my lifetime. My flatmate was far more cynical and felt I was in some dreamland, that it would never happen. An Asian player hadn’t even broken into the English Premiership League, so how was one expected to make it break into into the national squad. I, kept hope and faith, that one day I would see such a young man stand before the nation, and sing with great pride the national anthem. Four years on, and there is little chance of an English player of Asian origin making it into the Euro 2004 squad for Portugal. However, as always there is hope and I can only smile with great pride when I read the match report from England U21 versus Sweden U21, more important than the score, the significance of the game and the performance. A Michael Chopra saved English blushes and earned the young side a draw. How fantastic a name for the future of an Anglo-Asian player? A unique blend of East meets West in the the North East of England. The day he makes his senior debut will be day when I see myself in tears, as how national anthem is played. For me, personally it will be a moment of sheer joy and be the product of some twenty odd years of dreaming. “Son, we’ve made it..!” 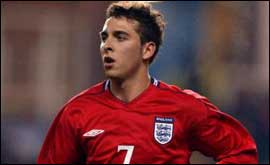 Back in Wycombe on Saturday morning. If all goes to plan, I should be home in time for the FA Cup game against Manchester United. I remember, two years ago, doing exactly the same thing. On that occasion, I was driving back from Leicester in my Mini Mayfair and the opponents were Newcastle at Highbury. (It was the match when Pires was stretched off and henceforth missed the World Cup in Asia!). How different things are, two years on. I am looking forward to my time at home. I know it will flow by without the wink of an eye, and that I will be back in Leicester before I know it. I know I should make the most of my time, back there. Mainly because I have only but a brief idea of what the next two months will bring. The 13th, has suddenly become an important and far more significant date for me in the next two months. I am not the most superstitious of people, but the fact that such important events occur on that day make me believe that there is some strong worldly power in play. If that is the day of reckoning, let it be. For I am sure, I shall be more than up to the test. Afterall, I should remind someone, that I… I don’t need to fall at your feet Just ’cause you cut me to the bone And I won’t miss the way that you kiss me We were never carved in stone If I don’t listen to the talk of the town Maybe I can fool myself I’ll get over you I know I will I’ll pretend my ship’s not sinking And I’ll tell myself I’m over you (I’m over you) Cause I’m the king of wishful thinking (King of wishful thinking) (ooh…) I am the king of wishful thinking

Come and Get Your Love - Single Version
Redbone
4 days

Everybody Wants to Rule the World
Tears for Fears
4 days